The executive summary and full report can be seen on our main website. The PDF version of the report can also be downloaded here.

The boundary crosswalk and school neighborhood data sets can be downloaded here:

Construction of the dataset

To assemble our dataset, we calculate public charter school and out-of-boundary participation rates by school boundary using DME’s dataset and assign Census Block Groups to school boundary neighborhoods to create a dataset of neighborhood level characteristics. All rates and percentages are expressed on a scale of 0 to 100 (not 0 to 1).

To evaluate boundary participation rates, we use DME’s dataset of Public School Enrollments per DCPS Boundary for school year 2016-17 (Office of the Deputy Mayor for Education, 2017). The dataset already includes the boundary participation rate for each in-boundary school: the numerator is the number of in-boundary students enrolled at the school and the denominator is all grade-specific public school students living in the boundary.

Given the high level of school choice in D.C., we are also interested in public charter school and out-of-boundary DCPS participation rates—calculations that are not reported in the DME dataset. Furthermore, for privacy reasons, the DME does not report enrollment information if a school receives fewer than 10 students from a boundary neighborhood.[1] Therefore, we must use estimates.

For schools that enroll more than 10 students from a boundary neighborhood, the data are straightforward and students can be mapped to schools using the DME dataset. But this leaves behind students who cannot be mapped: this is the difference between the total number of public school students and the number of students reported as enrolled in a specific school. We apportion this remainder to either out-of-boundary DCPS schools or charter schools using the composition of schools with no reported students for that boundary neighborhood.

For example, if DME reports 100 students for a boundary neighborhood but reports school names for only 90 of them, we have 10 remaining students who we know attend public schools but we do not know which one. And if the dataset reports two public charter schools and three DCPS schools in the total school with repressed enrollment, we assume that the 10 would be attending these schools in the same three-to-two proportion with 4 of these students attending a public charter school and 6 attending an out-of-boundary DCPS school.

Note: If more than one school is locate with a particular neighborhood, sum students for all schools to arrive at a neighborhood figure.

We construct each school boundary out of Census Block Groups so that we can aggregate data from the ACS 5-year estimates and other sources to create a dataset of school boundary neighborhood characteristics. 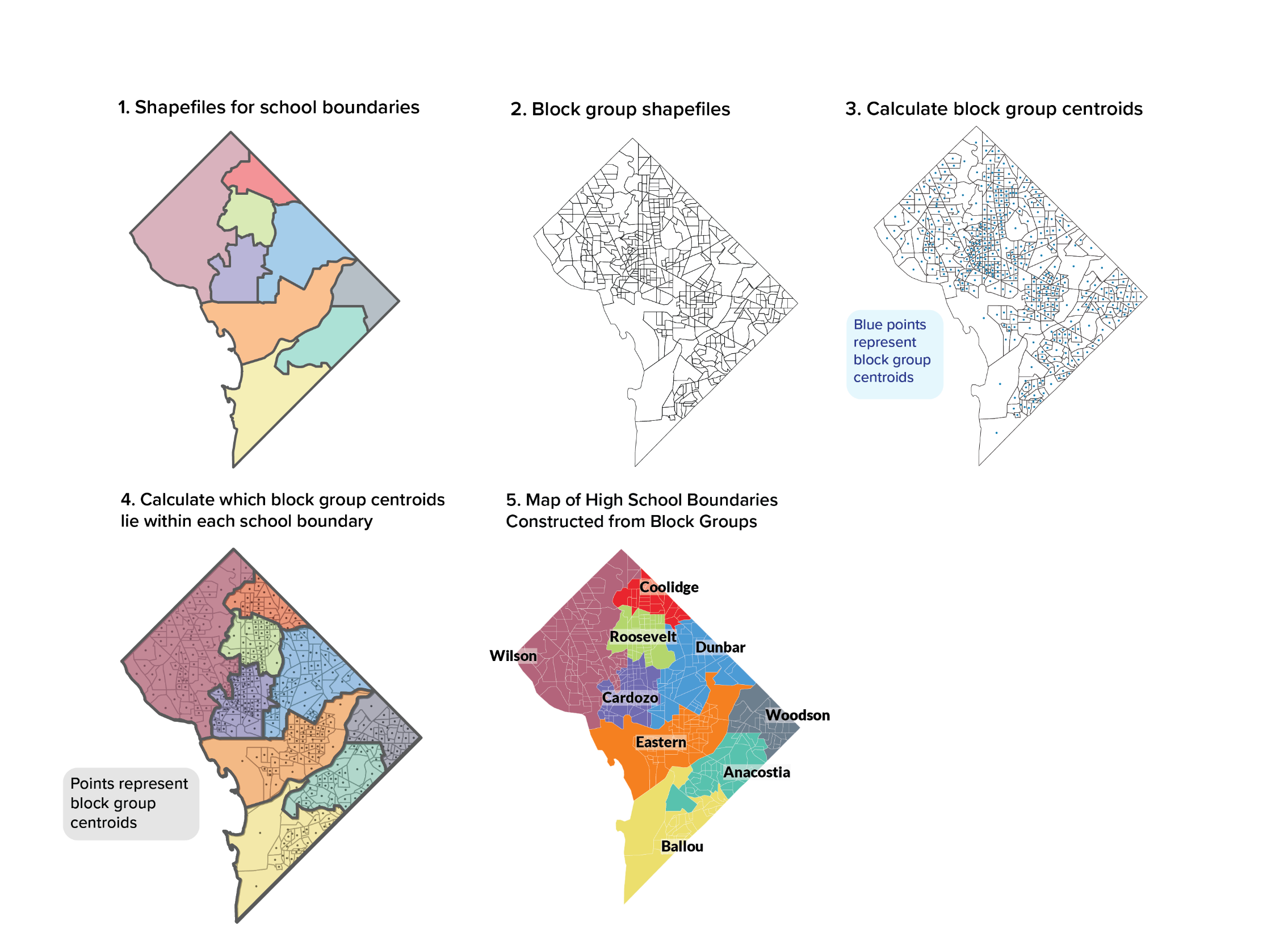 Available shape files for DCPS middle schools include three middle schools that were planned as part of the 2014 boundary school changes, but had not opened yet with in-boundary students as of school year 2016-17 (New North or Coolidge MS, Shaw MS, and MacFarland MS). We instead use boundaries for education campuses that served students in grades 6 to 8 within these areas, using the DCPS’s 2016-17 School Feeder Patterns as guidance (District of Columbia Public Schools, 2015). These education campuses were the in-boundary options available to students living in the to-be-established middle school areas. See methodology Table 1 for a full list of middle schools considered in our analysis.

CREATING A DATASET OF NEIGHBORHOOD CHARACTERISTICS

Using the crosswalk that matches Census Block Groups to school boundaries, we pull data from 2011 and 2016 ACS 5-year estimates, MPD, DME, OSSE, WMATA, and DDOT and aggregate at the constructed school boundary level. ACS data reflect a representative sample of the population, therefore data reliability declines when we look at sub-populations. To determine what variables provide reliable estimates, we calculate and check margins of error when combining estimates to examine coefficients of variation, which compare the margins of error to the estimate value (United States Department of Commerce, 2009). For example, we are not able to use estimates of white or Hispanic/Latino population due to coefficients of variation that were above 0.30 for much of the sample. We also account for size differences in school boundary by dividing the number of public charter schools and transit stops by the square miles and the number of violent crime incidents by the number of residents.

We are also interested in looking at how an in-boundary school’s demographic make-up is different from its boundary neighborhood. To do so, we compare the share of African American population in a neighborhood using ACS data to the share of African American students in a school using data from OSSE’s Equity Reports. Ideally, school enrollment should be compared to school-age population, but because of small sample size, we are not able to get a reliable estimate of the racial and ethnic composition of the school age population in each boundary neighborhood. But this approach gives a sense of own-group preference at the neighborhood level. For context, the child population is less white, more Hispanic/Latino, and more African American than the adult population (see Methodology Figure 2). This bias may affect some neighborhoods more than others, but our focus on neighborhood factors makes these differences in race and ethnicity by age relevant to our analysis.

METHODOLOGY FIGURE 2. A HIGHER PERCENTAGE OF CHILDREN ARE AFRICAN AMERICAN COMPARED TO ADULTS IN D.C. 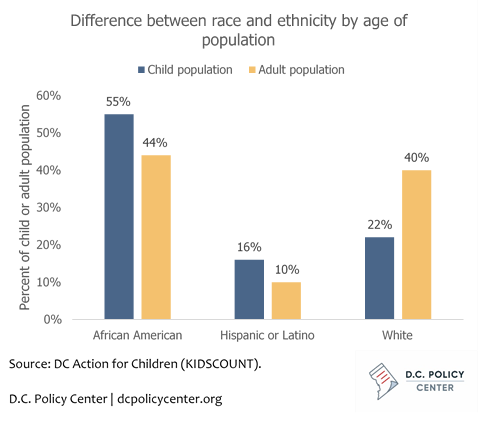 We look at elementary schools separately from the group of middle and high schools because different neighborhood characteristics may influence school choices for younger students where the school boundary neighborhoods are smaller and the students might not travel as far. We also perform the same analysis for public charter school participation rates to see if different characteristics drive these choices.

Finally, we predict boundary participation rates based on the best fit model. We then find the difference between each predicted and actual value, and identify schools that draw higher or lower proportions of in-boundary students than expected as those that lie outside the standard deviation for the difference. Any school already identified as a school that attracts the most or fewest students from its boundaries is excluded.

[1] About 20 percent of all public school students do not appear in the dataset because the group who live in a neigh-borhood and attend one school is smaller than 10 students.

[2] This crosswalk can be downloaded here. [.xlsx]

[3] Strong or moderate correlations are defined as any correlation coefficient with an absolute value between 0.40 and 0.59 for moderate and above 0.60 for strong (see J.D. Evans, Straightforward Statistics for the Behavioral Sciences).

[4] Although school factors are not the focus of our study, this check will show whether the Wilson effect persists when we account for student performance using a very rough measure of proficiency on the state assessment in mathematics.